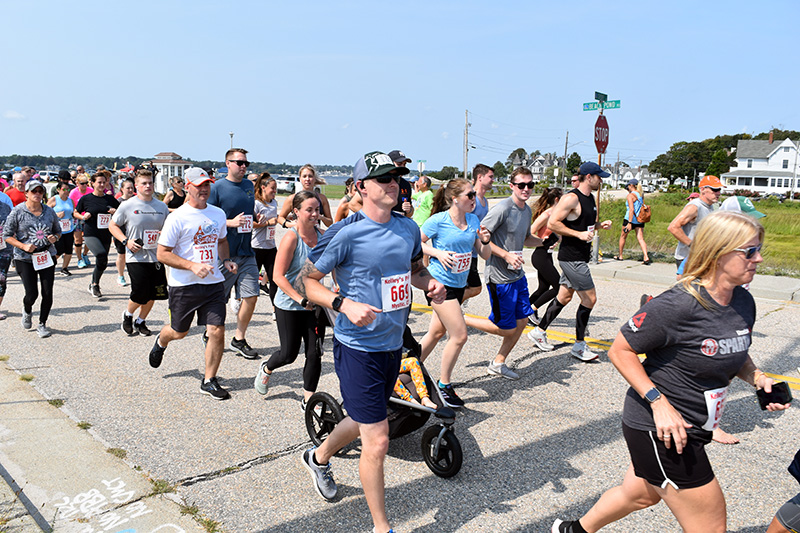 The 1st Annual Groton City Brew Run was held this past Sunday at Eastern Point Beach, with over 300 attendees enjoying a the 5K race, local brewfest, food trucks and live music. The race was hosted by the Greatest Mystic Chamber of Commerce in collaboration with Groton Utilities. By all accounts it was an extremely successful event with runners and beer drinkers alike having a wonderful time.

The 5K race began at 1:00 pm and was followed immediately by the brewfest located behind the Zbierski house at Eastern Point Beach in Groton. The brewfest featured eleven local breweries (complete list below), allowing patrons to sample any and all offerings the breweries brought with them. Most of the breweries brought many selections, ranging from lagers to IPAs to stouts, so attendees were able to discover what they liked best. By the smiles on the faces of the people in the beer garden it was easy to tell that a good time was had by all.

The overall winner of the 5K race was Stonington resident Kevin Halter, with a time of 21:58. The overall top three were Halter, Eric Ciocca and Benjamin Gollin. The female open winner was Brie Vess of Cromwell with a time of 24:09. Finishing second and third were Anni Rodgers and Ellianna Boothe. 230 runners participated in the race. All ages were well represented well, with the youngest runner aged 17 and the oldest 74. Twenty-three runners participated in the 60 and over age group.

Entertainment was provided by the band Whiskey, Wine and Coke, the acoustic version of the five-piece Coyote River Band.

We at the Greater Mystic Chamber of Commerce and the City of Groton/Groton Utilities had high hopes for the first Groton City Brew Run, but as an inaugural event we just didn’t know how it was going to turn out. We hope that everyone enjoyed themselves, ran a good race, discovered a new brewery or two, and enjoyed some food and music. We couldn’t be happier with how it turned out and therefore will be back next year with a bigger and better event. We hope to see you all there.